The travel time sign system along Oregon Highway 217 is one of Oregon State’s projects for Oregon Department of Transportation (ODOT). Photo courtesy of ODOT.

Oregon State students have played a vital role in creating critical software for the Oregon Department of Transportation (ODOT) while gaining valuable hands-on experiences with projects that are making an impact.

Ten years ago, ODOT sought out Oregon State to help create a software system to dispatch road crews from their four centers around the state. That was the beginning of a partnership that over the years has included nearly 50 projects.

“By automating processes with the dispatch software, we have improved the response to calls by five minutes.  So, the work the students have done is saving lives,” said Lynn Cartwright, project delivery manager for Intelligent Transportation Systems (ITS) at ODOT.

Another project is visible along Highway 217 — it is the first Oregon highway to have RealTime signs that give information on travel time based on current traffic flow. Students also worked on signs at Multnomah Falls that warn visitors if the parking lot is full.

Phillip Carter, computer science student, said that one of his favorite projects was one that retrieved information about a crash site to help ODOT dispatchers. The software can, for example, determine if the site is on a county or state road, which changes who is notified of the crash. A simple click on a map displays information from multiple data sources. 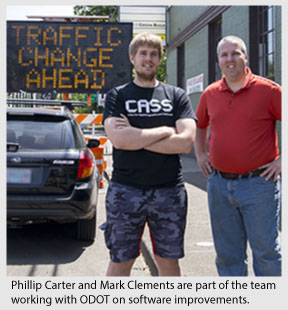 “It was very challenging because there was a lot of advanced queries that had to gather a ton of information while still being extremely efficient, and then that information was propagated across all the different layers of the system,” Carter said.

Mark Clements has watched the partnership with ODOT grow and develop over the years in his position as the software development and QA manager with the Software Development Group in the Center for Applied Software and Systems (CASS) at Oregon State, formerly known as the Business Solutions Group.

“It’s been valuable for both sides. On our side it's a great source of real-world learning opportunities for the students. And ODOT has benefited from the creativity that the students provide by having an outside perspective,” Clements said.

Giving students practical and impactful experiences was one of the reasons ODOT chose Oregon State for their projects. Cartwright said she also hopes it will open the eyes of students to the job opportunities in state government, of which there will be many. In her department, over 50 percent of employees are eligible to retire in five years.

The partnership has also provided the Software Development Group with steady work over the years, which Cartwright plans to continue in the future. “We look at this as a long-term relationship and we are working right now to identify projects for them. Now that the work on the dispatching software is winding down I can start involving them with other systems and other areas of ODOT outside of ITS,” Cartwright said.

Carter, now a senior, has been working for two years with the Software Development Group. The job allowed him to stay on campus and continue to take classes rather than move elsewhere for an internship which would have delayed his graduation date. He feels that the specific knowledge he gained with products such as Visual Studio helped him land his job with Microsoft which he’ll be starting this summer.

But the experience offered more than job training. “It’s really gratifying to work on projects that you know are helping people,” Carter said.